While I've made brandy-based cocktails from time to time, this is the first time I've really tried to get a handle on cognac as a spirit by itself. Thankfully I was able to pick up a couple of minis of Rémy Martin VSOP from The Party Source for a reasonable price. It's been an interesting exercise trying to dissect what is for me a relatively new and different spirit.

Rémy Martin was founded in 1724 in the Fine Champagne area of the Cognac region in France. As the name implies, the eau de vie for their brandy comes entirely from either the Grande Champagne or Petit Champagne crus (in this case Champagne refers to the chalky soil, rather than the bubbly wine). As with all cognac, the grapes are primarily Ugni Blanc, with smaller amounts of Colombard and Folle Blanche. The wine is double distilled in alembic stills, then aged exclusively in Limousin oak barrels, and finally blended to form the final expressions. The 'age dating' of cognacs is a little fuzzy, but there are some definitions. VS indicates that the youngest eau de vie in the blend is two years old, VSOP indicates that the youngest eau de vie is four years old, and XO indicates that the youngest eau de vie is six years old. In the case of Rémy Martin VSOP, it is a blend of eau de vies ranging from four to fifteen years old.

Taste: moderate raisin and apple sweetness up front, ripe berries, creamy middle, light chili/black pepper heat, baking spices, then a bit of oak, some more fruity sweetness, and some floral notes. After dilution, the palate becomes a bit flatter, though the floral notes retain their previous strength and something almost malty emerges near the back.

Overall I found this to be rather pleasant drinking. If it weren't for the raisin notes riding through everything, I'd say that it's not too far away from resembling a sherried Speyside single malt, but the nature of the flavors make it distinct. The vinous notes are more ethereal than what you get with sherry casks (this actually makes me tempted to try aging something like pisco in a sherry-seasoned barrel to see how they interact) and the character of the flavors is simply different in a way that I can't put my finger on just yet.

To test how well this cognac works in cocktails, I went with a classic: 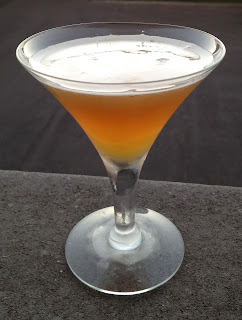 The nose is dominated by the orange liqueur, though a spicy note from the cognac peeks through as well. The initial sip has some grape-y sweetness, which is swiftly overtaken by spices and pepper from the orange liqueur and cognac, which fades out with bittersweet orange and oak.

While I can wish that this cognac had a few more percentage points of ABV, it holds its own rather well in a Sidecar. It balances rather well with the orange liqueur, supporting each other without either dominating the drink. The flavors that I found in the neat spirit are still very present, which is nice to recognize.

At least here in Oregon, Rémy Martin VSOP usually runs in the $35-40 range, which is perfectly decent, but not a spectacular deal. I will probably stick to cheaper brandies for making most of my cocktails, but this has encouraged me to poke my head deeper into the world of cognac, as I expect there will be some interesting surprises. There's been a bottle of Pierre Ferrand Reserve sitting forlornly in my liquor cabinet, waiting for my palate to sufficiently evolve, that I will have to revisit.
Posted by Jordan at 1:16 PM