Coming close on the heels of the second anniversary of my blog, this is the 100th post. In honor of that, I figured it'd be a good time to break out some of Haus Alpenz's newest prodcut, Kronan Swedish Punch, for an appropriately named cocktail: 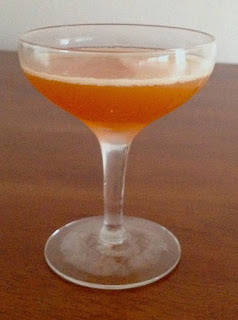 First, a little bit about Swedish Punch. This is a liqueur that has been popular in Sweden since the days when the Swedish East India Company's ships plied the seas, bringing back exotic ingredients like Batavaia arrack, tea and spices. Dipping into their stocks during long voyages, the sailors would mix those ingredients up into a tasty punch that was eventually turned into a pre-made drink. While traditionally drunk warm with pea soup, it eventually found its way into cocktails. Prohibition squashed many classic cocktails and Swedish Punch was one victim. Thankfully it's back and ready for use in those classic drinks.

The Hundred Per Cent Cocktail's nose presents some funky notes of arrack and rum, with a hint of smoke from the tea and a bit of fruitiness from the juices. Much like Erik over at Savoy Stomp, I found this drink to be less sweet than I expected it to be. The fruit is front and center, coming in strong with just a bit of sweetness from the liqueur and syrup. Further back the other elements of the liqueur assert themselves, bringing that delightful funk that both spirituous components of the Swedish Punch contain. The drink finishes smoothly, with a lingering taste of tea and fruit.

Overall this cocktail reminders me of a more complex Amaretto Stone Sour. However the Swedish Punch is significantly less sweet than amaretto, so it doesn't need as much citrus for balance. I can envision punching up this drink a bit with some Batavia arrack or Jamaican rum, but in that case some of the lovely tea flavor would be lost. I'm pretty pleased with this cocktail and looking forward to making more drinks with the Kronan. Last but not least, here's to many more posts.
Posted by Jordan at 8:22 PM