This drink comes from the inestimable mind of Giuseppe Gonzalez, previously of NYC craft cocktail haunts like the Clover Club, the Flatiron Lounge, Dutch Kills, and most recently half of the brains behind the fantastic PKNY tiki bar. This is one of his brilliant creations that warps the way cocktails are usually constructed. 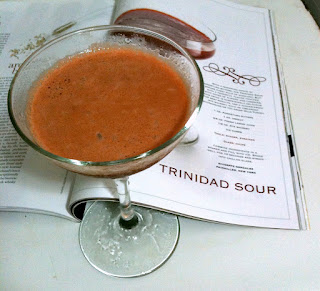 The nose is surprisingly subdued - the bitter's cherry, cinnamon, and allspice blend nicely with the rye whiskey. The lemon pokes out as well. The sip leads off with mild sweetness, quickly transitioning to the spice of the bitters and rye, with just a hint of nuttiness from the orgeat. This leads into a finish of lemon and residual bitterness.

Overall I'm shocked with just how good this drink tastes, given the completely bizarre proportions. And this is coming from someone who usually thinks that sweet vermouth is far too bitter on its own. The bitterness doesn't really kick in until the end of the sip, but even then it's more of a palate cleanser rather than beating the crap out of your taste buds as expected. The bitters and orgeat give it a wonderfully thick mouthfeel. To add to the enjoyment, the drink is an incredibly deep, rich crimson with bit of frosh on the top of the drink. My hat goes off to Giuseppe for creating such an incredible cocktail.
Posted by Jordan at 9:24 PM