Another set of provisional reviews, this time from a trip to the best scotch whisky bar in the Portland area, the Highland Stillhouse. 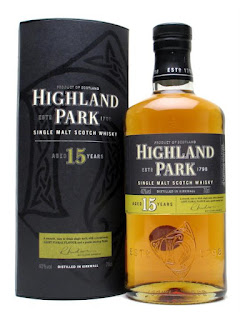 Nose: good Oloroso sherry influence, gentle peat rides under and over the sherry

Taste: more sherry than the 12 year up front, almost liquid raisins, nutty peat near the end, which gains some lovely raspberry chocolate mid-palate after adding a few drops of water

I had high hopes for this dram, but sadly couldn't dig as much out of it as I was hoping to find. Highland Park 12 is easily one of my favorite whiskies and a few more years in a slightly different mix of barrels seemed like it could produce an interesting product. Instead what I mostly got out of this was Macallan 12 with a layer of peat smoke on top. Not bad, but not terribly exciting either. Admittedly this was a single dram drunk at a bar, so I didn't get to sample it under ideal conditions, but it didn't make me want to rush out and buy a whole bottle. I probably will some day, but it's not high on the 'to buy' list.

A drunk guy sitting next to me at the bar picked up and left before he had finished his dram, passing it off to me. While I was a little dubious, I wiped the rim with the whisky to kill any lingering germs, figuring that nothing was going to survive within the whisky itself.

Overall, I'd say that this is a mostly inoffensive blend. There are a few odd notes on the nose, but it mostly accomplishes its goal of being sweet in an uncomplicated fashion. If you're looking for something to drink on the cheap, you could do a whole lot worse than Grant's. With that said, you could also pay a bit more money and get a bottle of Isle of Skye 8 Year or, you know, some really good bourbon or rye.
Posted by Jordan at 6:09 PM