This is a set of 200 mL bottles containing the CV (Curriculum Vitae or Chairman's Vat, no one seems to be sure) expressions of Hazelburn, Springbank and Longrow whiskies from the Springbank distillery in Campbeltown. 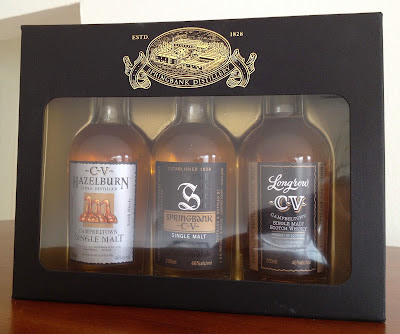 Springbank is unique among scotch whisky distilleries in that the entire operation - from floor maltings to distilling to aging and bottling - is carried out on site. The ability to make their own malt is key to their three whiskies. Hazelburn is produced from unpeated malt, Springbank is made from lightly peated (~10 PPM) malt and Longrow is made from heavily peated (~55 PPM) malt. Additionally, each whisky is distilled in a slightly different fashion. Hazelburn is triple distilled, Springbank is distilled two and a half times (two full distillations, then part of the double distilled whisky plus the leftover feints from previous second and third distillations is distilled again), and Longrow is double distilled. For some neat diagrams that detail exactly how each whisky is distilled, check out the 'distillation process' tab on Springbank's page for each whisky. I really appreciate the distillery being so open about their process, as details like these help to build an understanding of the influences on each whisky.

Both the malting and distilling methods contribute strongly to the character of these whiskies, which lets Springbank produce almost any style of whisky imaginable. Hazelburn, with its unpeated malt and triple distillation, shares much in common with Lowland whiskies. Longrow, with its heavily peated malt and double distillation, is almost a dead-ringer for an Islay single malt. However all of the whiskies retain a distinctly Springbank character, largely in the briny flavors that can be found across the range. Another feature of the distillery's products is that they are all bottled at a minimum of 46% and without chill filtration, which helps to give all of the whiskies good heft and body.

The CV bottlings of Springbank's three whiskies are a way to deal with the fact that the distillery currently has large amounts of younger whisky and older whisky, but less of the 10-14 year old whiskies that usually go into standard age statement whiskies. So the CV editions contain mixes of whiskies that are roughly 6-14 years old. While the exact proportions remain a secret, it's safe to assume that the preponderance is going to be whisky on the younger end of the spectrum with a bit of older whisky to add some complexity. Additionally the whisky in these expressions has been aged in a number of different casks that previously held bourbon, sherry, port and rum. Again, it seems safe to assume that ex-bourbon cask whisky will make up the bulk of what goes into these whiskies, with smaller amounts of other cask finished whiskies added for complexity.

Taste: malty sweetness tinged with sourness, brine, wood spices, pepper, a touch of sherry just before charred bitter oak near the back. After dilution it becomes sweeter up front, with less sourness and a hint of chocolate mid-palate

Finish: long, carries through the same flavors as the palate - brine, bittersweet cacao, oak and a bit of lingering peat. It gains a bit of vegetal peat after dilution

Hazelburn CV is made from whiskies that are 6-10 years old, which are mostly aged in ex-bourbon casks and a smaller amount comes from sherry casks. As I noted, Hazelburn shares many similarities with Lowland whiskies, both in terms of production and the flavors of the whisky. And compared to either Glenkinchie 12 or the Auchentoshan 12 I tried last year, this is significantly more robust. The bottling proof and lack of chill filtration definitely help to beef up the final product. Hazelburn clearly enunciates Springbank's character, without any peat to mask it. The briny notes make for a nice counterpoint for the lighter flavors of this whisky, making it much more interesting than a lot of Lowland or Irish malt whiskies. In some respects, it reminds me a bit of a younger wheated bourbon, like Weller Antique, with the very grainy nose and fairly sweet palate, but without quite so much caramel and vanilla. With that said, this whisky feels slightly unbalanced, especially on the palate - I've got to wonder if they combined younger malts with older casks that have gotten a bit too woody and hoped that it would come out somewhere in the middle. If so, I don't think they've quite hit the mark. So while I'm glad to have tried it, I'm also glad that I only got a 200 mL bottle. Every once in a while it will really tickle my fancy, but it's not selling me on the much more expensive 8- or 12-year old Hazelburns.


Nose: sweet peated malt, a bit smoky, rubber, light burnt sugar, a touch of TCP, and vanilla. After adding a couple of drops of water it becomes softer with more creamy malt, a bit less peat, but with other vegetal and herbaceous notes, cinnamon, baking spices, rum, bourbon, a hint of sherry and fruit, and a touch of chocolate

Taste: lightly sweet malt up front, transitions to a healthy dose of dry cacao and big pepper, which then becomes lightly smoky peat, TCP, some fortified wine, and bitter wood. After adding water, it becomes fresher, with honeyed malt up front and continuing almost to mid-palate, pepper is reduced and doesn't kick in until almost the back of the mouth, and a touch of sherry peeks out

Springbank CV is made from whiskies that are 7, 10 and 14 years old, aged in ex-bourbon, sherry and port casks. While the cask-finished whiskies don't make their presence known too strongly, the smells and flavors are there, which fits well with the lightly peated malt. The combination of peat, pepper and mocha that I found through the experience was a really nice combination and reminds me favorably of Talisker 10 Year. However, like the Hazelburn, it clearly leans towards the younger single malts, which means that it feels like there's a lot more influence from the distillation than from the wood. Overall this is a nice whisky, but I'm still waiting to be blown away.


Nose: earthy, vegetal and smoky peat, barbecue, rum, minty toothpaste, ripe cheese, polenta, salted toffee underneath, a whiff of TCP/bandaids, medicinal, and bacon. After dilution the TCP and malt take center stage, with less peat but the addition of a bit of wood underneath

Taste: somewhat thin up front, not very sweet, peat comes in mid-palate, gains salted vegetables further back, pepper and bitter coffee kick in towards the finish. After dilution there is a healthy dose of sugar cane sweetened malt up front, some chocolate mid-palate, peat, oak, and TCP don't show up until the back of the mouth

Longrow CV is made from a whiskies that are 6-14 years old and have been aged in the full range of casks used in the CV expressions. I'm just going to come out and say that of the three whiskies in this set, the Longrow wins hands down. In large part I think this is because heavily peated whiskies are often more drinkable at a younger age, as so much of their flavor comes from the peat rather than the barrel. The heavy peat also gives it a complexity and depth that the lighter Springer CV whiskies can't match. This is the only one that I can envision buying a full bottle, as it's a robust experience without feeling incomplete like the Hazelburn and Springbank CVs. Additionally, the age dated Longrows tend to command very high prices right now (at least in the U.S.), so this is a good way to try what Springbank can do with heavy peat.

With that said, I have high hopes for Springbank 10 and the 12 year cask strength whiskies. They get rave reviews and I'm really looking forward to trying them some day. There are also some really intriguing Longrow expressions available in the U.K. that I may have to order from Master of Malt or the Whisky Exchange someday.
Posted by Jordan at 9:00 PM