This drink comes from the Hukilau Room of the Captain's Inn in Long Beach, CA, sometime around 1962.  For a glimpse at the bar's 1961 menu, check out Arkiva Tropika's archive. 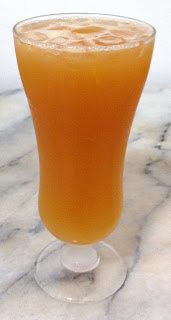 Combine all ingredients except for soda water, shake with ice then strain into a chilled double rocks glass and top with soda water, then stir briefly. An ice cone is a nice touch and will help to keep the drink cold.

Since this is such a rich drink, I lean towards something like Appleton 12 Year for the dark Jamaican rum. It still has that distinctive dunder funk note, but also brings a lot of rich molasses and oak flavor to the drink without being as assertive as, say, Coruba Dark. For the gold Puerto Rican rum, something like Ron Abuelo 7 Años, Bacardi 8 Años or Flor de Caña 7 Year would all be good, not terribly expensive choices. While the recipe calls for grade A maple syrup, I'd lean towards the more flavorful grade B, as it integrates nicely with the falernum. Speaking of which, this is a situation where you want to use an alcoholic falernum, like Blair's Dark Falernum, rather than a falernum syrup, which will make the drink too sweet. Lastly, be careful with the vanilla and almond extracts. Anything more than the called for drops will overwhelm the delicate balance of the drink.

The sip leads off smoothly with sweetness from the maple syrup and liqueurs, leading into a touch of sourness from the lime juice and spice from the falernum, followed by the dunder funk of the Jamaican rum and finishing smoothly with mild sweetness. Overall this is a very nicely integrated drink given the plethora of flavors going into it. With that said, I'm glad to have tweaked it because even with the bump in volume for the three rums, they aren't exactly pushing themselves to the front. However, you might want to make sure that you don't have anywhere else to be for a little while after having one of these.
Posted by Jordan at 10:47 PM