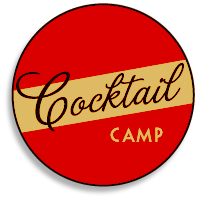 Now for Part II in my set of posts about Cocktail Camp PDX.

The Lunchtime Social Hour was run by New Deal Distillery. There were a handful of cocktails being made, but I only got a chance to try one:

Combine all ingredients except for the wine, shake with ice, then strain into a chilled glass and top with the sparkling wine and a dash of Angostura bitters.

The nose presented the sparkling wine, a hint of rye, the spice of the bitters and a bit of vegetal ginger. The sip opened with bitters, sour lemon and ginger, the sparkling wine coming in mid-palate, finishing with the ginger bite, with a fruity note that reminded me of pineapple weaving through it all. Overall a decent drink, but it just didn't quite come together for me. Which is a shame, because I like the set of ingredients, but I might have to tweak the proportions to make something that will fit my tastes.


The first talk of the afternoon was the Perfect Host, presented by Morgan Schick of Jupiter Olympus, a cocktail consulting and events company. This was designed to give people a sense of how to put together a cocktail party and build a menu with sufficient breadth to keep people interested, but not so broad that it's impossible to have every single ingredient on hand. One way to deal with this is to stick to the basics - drinks like Manhattans, Gimlets, Martinis and the like can all be made with a handful of ingredients, many of which will pull double- or triple-duty, allowing you to make a decent number of drinks without a huge back bar. Additionally, by introducing only a few other elements - homemade syrups, some simple infusions - you can generate new and interesting twists on those drinks without greatly expanding the number of necessary ingredients.

A Manhattan variation, the 17,000 (the number of islands in Indonesia, where Batavia arrack comes from), was served during the Perfect Host talk:

Combine all ingredients, stir with ice and strain into a glass

Sadly this one just didn't do much for me. Admittedly, that's largely due to the fact that Manhattan-style drinks just seem too bitter, but I felt like the arrack wasn't balancing well with the other ingredients. I'm tempted to play around with it on my own, but it seems like a tricky one to get right.


The Afternoon Social Hour was sponsored by Campari, which meant that all of the cocktails a) contained Campari and b) were designed to be aperitifs. The first one I tried was a relatively spicy number by David Shenaut:

Combine all ingredients, shake with ice, strain into an ice-filled Collins glass and top with ginger beer.

This one just didn't quite tickle my fancy. Mostly ginger and vermouth on the nose. The taste led off with some sweetness from the ginger beer, creamy lime mid-palate, and finished with bitterness from the vermouth and Campari mixed with the grainy spice of the rye. The flavors felt a bit muddled, though they integrated a bit better after some of the ice had melted. As with the Ginger Fizzle, I felt like there was a good drink inside it, but it needs some tweaking to really fit my tastes.

After the Souracher, I sipped a drink from Allison Webber that rescued an otherwise somewhat lackluster set of cocktails:

Combine all ingredients, stir with ice and strain into a chilled glass.

This was a seriously good drink. The nose was sweet and spicy, with big fruit and vanilla - overall a fantastic sweet/savory balance. The sip was a reprise of the smells, in the same order, with a bitter, slightly salty finish. Given how heavy it was on bitter aperitif-oriented spirits, it came together with shockingly good balance. Every element had its place, presenting itself and then making way for the next piece. My mouth waters just to think about having another one of these cocktails.


The last talk of the day was an Introduction to Aperitifs, presented by Neil Kopplin of Imbue Vermouth and Tony Devencenzi of Bourbon & Branch. The talk began with a small history of aperitifs. Their historical antecedents go back to the medicinal tinctures that had been created since time immemorial from herbs and spices steeped in alcoholic beverages. Their definite beginning came with the invention of vermouth in 1786 by the Italian merchant Antonio Benedetto Carpano. Carpano soaked a mixtures of herbs and spices in white wine, then dyed it a deep red. This was what would come to be known as sweet or Italian vermouth. The drink became popular and a few decades later, at the beginning of the 19th century, the Frenchman Joseph Noilly created a pale, drier variety of vermouth that we know now as dry or French vermouth.

Another class of aperitifs are known as quinquinas, originating with Joseph Dubonnet in 1846. Dubonnet's drink was developed as a delivery method for the malaria-fighting bark of the South American chinchona tree, which contains quinine. These aperitifs have a particular quality of bitterness that it different than that found in vermouths. Other bitter aperitifs emerged over time, such as Campari, Aperol and amari bitter liqueurs like fernet, Cynar or Jägermeister.

What all of these drinks have in common is a bitterness that makes them good to drink before a meal. This is because the brain associates bitter flavors with poison, which stimulates the salivary glands in an attempt to dilute the ingested compounds. In the case of aperitifs, this helps to prepare the mouth for the meal to come. Additionally, aperitifs usually have a fairly low proof around 20-30% ABV. This makes them relatively light on their own and even more so when lengthened with soda water or other non-alcoholic drinks. As Neil put it, this makes them 'sessionable' as you can spend time drinking them without becoming significantly intoxicated.

Neil talked a bit about the creation of his own aperitif, Imbue bittersweet vermouth. This is another one of those Oregon products that came about because people were sitting around drinking and decided that they wanted to make something new and interesting with all of the great materials that this state has to provide. After a lot of experimentation, they came up with a vermouth that is somewhere in between a sweeter traditional blanc vermouth and dry vermouth, which is more bitter. I got to try some mixed with ginger beer and a dash of Angostura bitter. The results were pretty tasty. I'll be picking up a bottle once I've gotten through my current bottle of sweet vermouth.


Overall I really enjoyed Cocktail Camp. I got to learn a lot and drink some very tasty drinks. I'm looking forward to seeing what the event looks like next year.
Posted by Jordan at 4:22 PM